One you may not have heard of is his role as brand ambassador for UAE-based Streit, a defence company that makes sophisticated armoured vehicles right here in Ras Al Khaimah.

Born in the US, the actor gained international fame for roles in the 1980s and 1990s in action films such as Under Siege and On Deadly Ground. He is a vocal supporter of Russian President, Vladimir Putin, and holds Russian and Serbian citizenship. But he only wanted to talk Streit at Idex in Abu Dhabi on Tuesday to help launch four new vehicles. 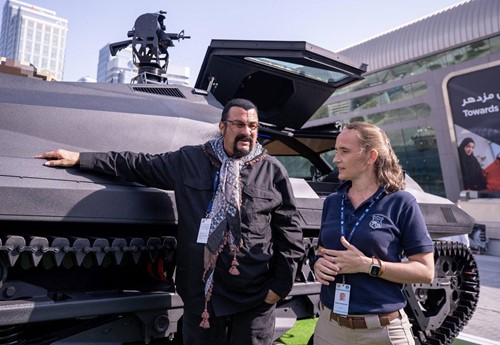 “I’m interested in weapons, military history, tanks and armoured cars and I’d heard about Streit, I was very impressed. [These] armoured vehicles are probably the best in the world.”

When asked what sparked that interest, he said: “Why do people like purple instead of green? I was always interested in that since I was a child.”

One of the most striking of the vehicles launched on Tuesday was the Storm, a sleek UAE-manufactured electric behemoth. It was described as looking like a cross between a Lamborghini and stealth fighter and it wouldn’t look out of place in a Batman film. Streit would not reveal how much one cost.

“I’m a shooter. I have thousands of guns,” said Seagal, 68. “People ask me 'what is your favourite gun?' I’ll say 'for what?' Not one gun does everything and it is the same with the vehicles. But my favourite is the Storm. I love that vehicle,” he said.

“It is gorgeous and does a lot of great things. It goes on water, goes on land – it is armoured and bomb proof. That thing is amazing. If I could have any one of those vehicles, I’d have that one.”

Streit was founded in Canada in 1992 and has been headquartered in the UAE since 2005. One of its six production plants is in Ras Al Khaimah where many of the vehicles are manufactured and put through their paces on a specially designed assault course. It produces armoured personnel carriers, luxury and security vehicles as well as armored boats. It says its vehicles are designed to save lives.

“It provides armoured vehicles to countries that maybe get attacked so they could be protected.”

All clad in black, Seagal mirrored the Storm’s livery as he posed outside it at Idex. His frame is as imposing in the flesh as it is on the big screen. It’s not his first time in Abu Dhabi but was his first at Idex and it was clear he was impressed. “I’ve been here a thousand times. I love Abu Dhabi a lot. It looks like a lot of great stuff out here.”

Seagal is also a guitarist, involved in a line of energy drinks, an environmentalist and an animal rights activist. But many of his recent films have been direct to video. What does the future hold?  “I may make a few more movies,” he said.

“Like any other human being on earth and any other actor on earth everything has to evolve over time. Movies change, genres change, people change – after the pandemic Hollywood completely changed, America changed.

"I’m going to try stick with being a diplomat and, with diplomatic work, to help bring nations and people together.”