In mid-October 2021, NEC announced the partnership with Streit Group for the manufacture of armoured vehicles in Nakosongola in central Uganda.

The new company, NEC-Streit Uganda Ltd, will provide a variety of security solutions, including through technology transfer.

“I am happy to witness clear dividends in the form of production and assembly plants under NEC-private companies’ joint ventures,” Museveni said while commissioning the armoured vehicle facility on 27 July, along with a 500 kW solar power plant, a surgical masks and sanitizer producing entity, and an oxygen/nitrogen plant. He also inspected some of the vehicles manufactured by Kiira motors.

“I salute the progress that our scientists are making in those fields, acquiring the capacity to produce quality products to enable us to stand on our own, not only in the military space but in other areas of strategic importance to enhance our broad security,” Museveni said. He added that Uganda would no longer need to buy foreign vehicles when local manufacturing was possible.

“It’s a full-fledged manufacturing facility, not just assembly,” Streit chairman Guerman Goutorov said. “All the products it will produce you can proudly say: made in Uganda.” He added that its products will help fight terrorism and crime. 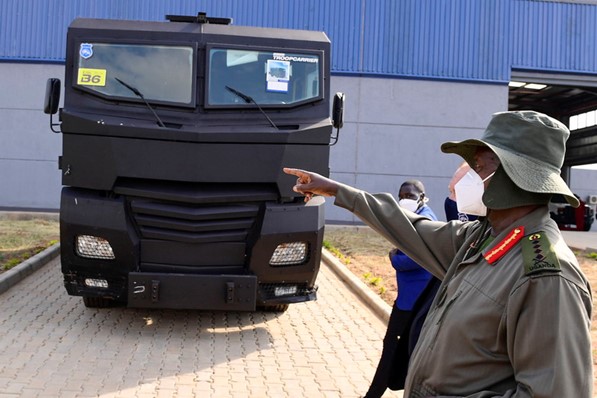 Uganda People’s Defence Force chief General Wilson Mbadi said the armoured vehicle plant would produce vehicles for Uganda’s military, police, VIPs, and regional requirements. “By building a self-reliant defence industry, we are capable of securing Uganda and also support the economy. This will also help us tackle the problem of economic irrationality by consuming what we don’t produce and producing what we don’t consume. It will help us apart from technology transfer, do local capacity building, save foreign currency and enhancing mobility, fire power, protection and operation efficiency,” Mbadi said.

“This factory has the capacity to manufacture for UPDF, police, VIPs and the regional requirements. At some point we will consume these and our market will not be enough. We must be friends with neighbours so as they can buy the balance.”

Streit has indicated it is willing to offer Uganda other equipment, including unmanned aerial vehicles, armoured boats, and communications equipment. Goutorov said Streit’s research and development will be shared with Uganda. 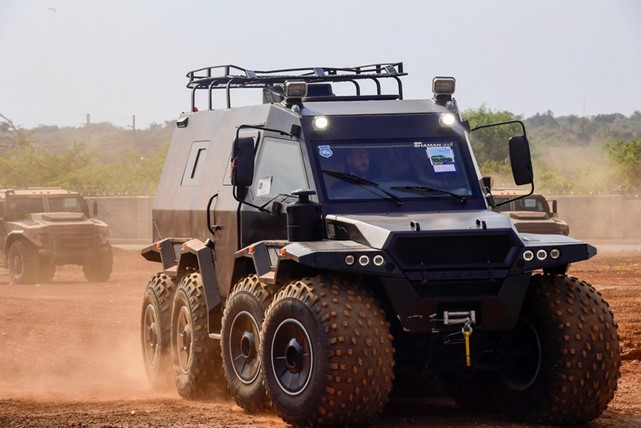 The state-owned NEC is the commercial arm of the Uganda People’s Defence Force (UPDF). NEC was established in 1989 by an Act of the Parliament of Uganda. Its investments and activities include agriculture, manufacturing, healthcare, services, and defence industry projects and companies. Its commercial ventures are undertaken through its subsidiaries and joint ventures.

Uganda has been developing its local defence industry and in August 2018 officially launched an Armoured Vehicle Manufacturing and Assembly Facility in Maga Maga. Its first product was the Mamba-based Nyoka armoured personnel carrier, created in collaboration with South Africa’s Twiga Services and Logistics via its Ugandan sister company Impala Services and Logistics. Manufacture and assembly of the vehicles began in 2013 under a transfer of technology agreement.

Streit APCs, including Cougar, Cobra and other models ranging in mass from six to 16 tons, are in service with a number of African militaries, including Burkina Faso and Mali.