The Streit Group chose South Africa to launch its newest vehicle, the Falcon armoured personnel carrier. It was launched at the Africa Aerospace and Defence (AAD) exhibition outside Pretoria earlier this year. 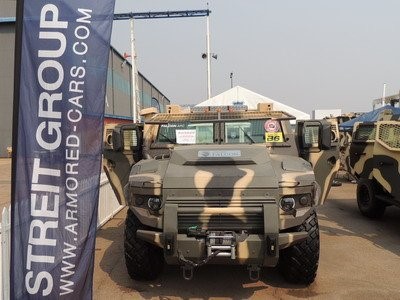 Streit said the Falcon can be deployed for various missions including peacekeeping operations and convoy escort and the 4×4 vehicle can be outfitted for many different roles and can, for example, carry a rocket launcher, remote controlled weapon station, smoke grenade launchers and cameras.

The Falcon is 5.7 metres long, 2.33 metres wide, and is 2.4 metres high. It can carry a 1 500 kg payload. The basic version carries two crew and seven passengers and can be armed with a 7.62 or 12.7 mm machinegun or an automatic grenade launcher on the roof. Ballistic armour is to CEN Level BR6 and BR7 while landmine protection is to STANAG Level 2. Run-flat tyres are standard.

The Falcon joins Streit’s extensive lineup of armoured vehicles, which cover a wide spectrum from under 6.5 tons to over 16 tons. The company’s lightest vehicles include the TLC-79 tactical vehicle, Cobra, Cougar, Python and Puma light armoured vehicles. The Spartan, Gepard and Warrior armoured vehicles fall into the 6.5-10 ton category, while the Gladiator, Scorpion, Shreck and Tyhpoon vehicles weight 11-16 tons. On the large end of the scale Streit offers the Titan 6×6, Fiona 6×6, Tphyoon 6×6 APC, Varan and Alligator infantry fighting vehicles and Hurricane 8×8 armoured truck.

Streit has diversified into the maritime sector and in May this year launched Streit Marine, which offers five different boats including its flagship Triton, which can be fitted with Level B6 and B7 armour. This vessel was designed and tested at the company’s facilities in the United Arab Emirates. The flagship Triton G810 can be powered by two 250 hp or two 350 hp outboard motors giving a top speed of 80-100 km/h depending on engine choice. It is eight metres long and can carry up to ten crew members.

Streit said its Triton boats can be used for a wide range of mission profiles, from fast patrol craft to anti-piracy. Options include deck mounts for crew-served weapons, and remotely operated turrets, boarding ladders, FLIR cameras etc. The hull is made from high density polyethylene (HDPE), which is extremely tough and almost maintenance-free.

Streit was established in Canada in 1992 but also has offices around the world, with production facilities in Canada, the UAE, USA, India, Jordan, Iraq, Turkey, Pakistan and Thailand. The company makes armoured vehicles, cash in transit, luxury and custom luxury and security vehicles.