Abu Dhabi, United Arab Emirates: Day 2 of the International Defence Exhibition (IDEX) kicked off with a bang and the launch of four brand new vehicles by UAE-based STREIT Group. 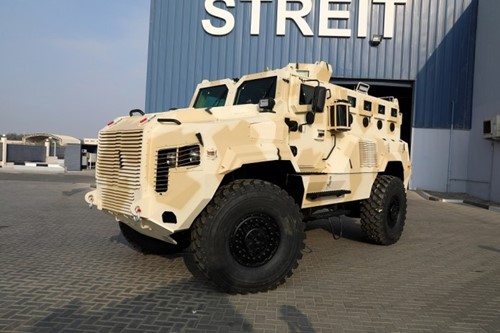 The unveiling ceremony was hosted by STREIT Group’s Chairman – Guerman Goutorov where he explained the huge achievements of the company and its efforts over the last 30 years to support governments in crisis situations and to save lives.

The brand-new STORM is the first tracked vehicle for STREIT Group and the first tracked vehicle ever manufactured in the UAE.  “This step is a huge step for the company and we are proud to have achieved this milestone”, commented Goutorov. The other main advantage of the STORM is that it is fully electric but also comes with additional generators.

STORM is designed to be used for a wide range of specialist military and civilian purposes. Built for the harshest environments, the vehicle offers exceptional mobility, reliability and features the latest technologies in ballistic, IED and mine blast protection. Due to the versatile nature of the vehicle, the STORM is not only completely silent but can be configured with amphibious and sea floating capabilities. The STORM can be configured with remote control systems allowing for autonomous operations. Its cutting-edge look left an impression on everyone passing by the company’s stand at the Abu Dhabi National Exhibition Center, ADNEC.

Seagal was impressed not just by the capabilities of STORM but also by its design. “The design of the STORM looks like a crossover between a Lamborghini and a Stealth fighter, and is definitely one of the head turners at IDEX 2021”.

The second vehicle to be unveiled was the DHABI. “The DHABI combines the best technology from around the world and was specially designed for the needs of the UAE Armed Forces and their efforts to achieve and maintain stability in the region”, Goutorov explained.

The DHABI’s V-shaped hull helps to deflect blast waves and debris away from the crew compartment. The lifted body and increased ground clearance enhance its protection against mines. With STANAG III adaptable blast and ballistic protection as a standard, and up to STANAG IV with add-on plates, DHABI comes at an advanced price but also advanced technology. DHABI will be used by customers in varying roles such as a mounted infantry troop carrier, ground support vehicle for dismounted troops, medical evacuation platform, long-range border control vehicle, or easily configured as a command-and-control vehicle.

Steven Seagal, who assisted in unveiling the new vehicles, said “I believe in STREIT’s mission to save lives around the world and am honored to unveil these vehicles which will contribute to achieving that goal.”.

The third vehicle unveiled, NISR, is designed as a mounted infantry troop carrier and ground support vehicle for dismounted troops. “Our engineers spent the last 2 years developing the NISR, using the latest technology from across the globe.”, Goutorov added. Its state-of-the-art approach and departure level is unheard of in its category so is its power with 450HP, top speed of 120km/h and its maneuverability. It can be easily configured as a command-and-control vehicle, medical evacuation platform, or as a forward observation platform (FOO). The NISR offers occupants blast protection to STANAG Level IV. It features a V-shaped monocoque armored hull design as well as the floating seats offer advanced protection to the 10-man crew.

The final vehicle unveiled was the CONDOR – a newly designed MRAP with STANG Level 2 upgradable to STANG 3. High mobility and off-road capability mean this vehicle can be used in any hostile situation with exceptional field performance in urban as well as off road environments. This vehicle has 8.9 L Engine with 400 HP. CONDOR can be deployed in various mission by military and paramilitary forces.

“We like to extend our thanks and gratitude to the UAE government who are running a successful event kickstarting the COVID 19 recovery phase. Their efforts and their excellent safety protocol allow us to meet our clients, partners and friends face to face again.

STREIT Group has been exhibiting constantly since 2009, demonstrating the close ties with IDEX, and is proud to be the exclusive Diamond Sponsor for the 2021 edition.

STREIT Group was originally founded in Canada in 1992, the Group has been headquartered in the United Arab Emirates since 2005. Starting with just 8 employees, the group has grown steadily over the past 3 decades to become a Global leader in armored vehicles. STREIT Group now has offices across the globe as well as 6 production plants out of which thousands of vehicles are manufactures each year, thanks to a total workforce of over 2,000 employees from over 30 different nationalities. At any given moment STREIT Group has more than 1,000 vehicles in stock for immediate deploy.